It all started over such a seemingly little thing, one golden apple, not a terribly rare commodity on Olympus.  But this one was inscribed "For the Fairest" and tossed by Eris, Goddess of Discord, amidst the guests at the wedding of Peleus and the nereid Thetis (parents of Achilles).  All the gods had been invited to the grand occasion except, naturally, Strife (shades of Sleeping Beauty here) who took her revenge by creating a contest among Hera, Athena and Aphrodite as to who was most deserving of this prize.  Not wanting to get caught up in the quarrel, Zeus advises the three to seek out Paris where he is tending sheep on Mt. Ida, as the young man is known for his discriminating taste.  (Paris is a Trojan prince but does not know it at the time, having been left as an infant to die of exposure after his mother dreamed he would bring about the downfall of Troy.  Of course the shepherd charged with carrying the babe to the mountain ends up raising him instead.)

Each goddess tries to bribe their rustic judge: Hera with the promise of dominion over great territory; Athena with victory in battle; Aphrodite with the most beautiful woman in the world, Helen, daughter of Zeus and Leda.  Paris chooses the last and awards the apple to Aphrodite.  There are two problems with this.  Helen is Greek.  She is also already married to King Menelaus.  A further complication is that, due to a shrewd move on the part of Odysseus at the time a spouse for Helen was being chosen, Menelaus has a handful of other powerful Greeks as his sworn allies should he need them in the event taking to wife Helen, coveted by so many, creates a problem.  When Paris, despite prophetic warnings that no good can come of it, abducts Helen, Menelaus summons the others, and so, after some initial obstacles, the Trojan War begins. 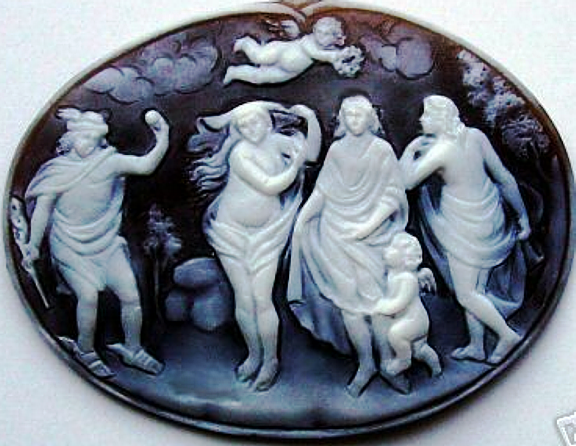 Zeus has his messenger Hermes (Mercury) conduct the trio to the shepherd prince.  (There are some oddities here.  The figure surely meant for Aphrodite, the most scantily clad and standing nearest to Hermes, has been made to look very like the Galatea of Raphael, while Cupid, normally serving as one of her identifying attributes, is clinging to the leg of one of the other goddesses.) 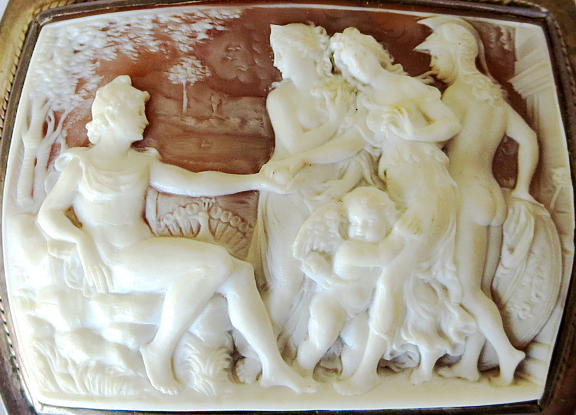 The awarding of the apple with all three goddesses standing is shown in this contemporary rendering by Giovanni Noto. 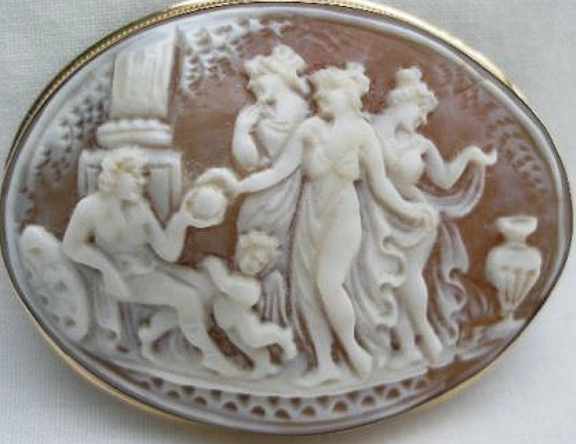 And in this less accomplished specimen by an unknown carver to the left. 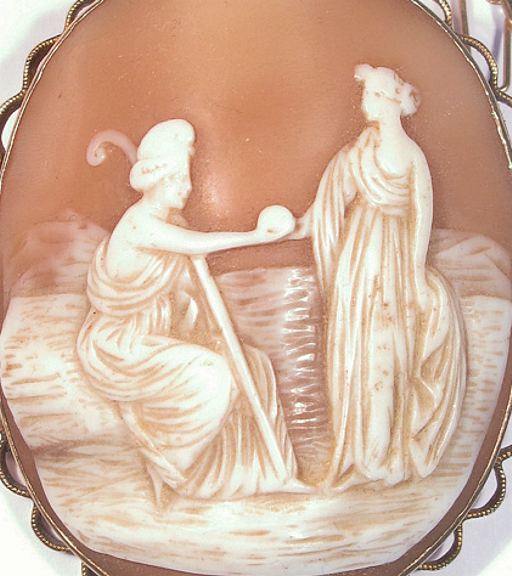 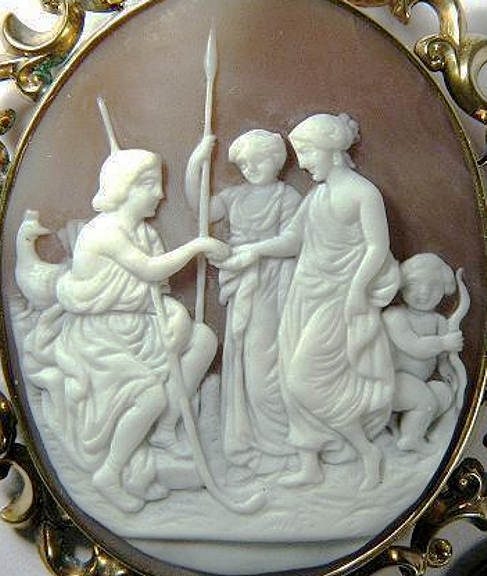 Sometimes carvers chose not to show all three goddesses—or were not up to the task—and depicted only two (Hera is represented in the form of her sacred bird, the peacock), or even just the one winner.

On the other hand, sometimes it is Paris who is off stage, with the three contestants shown posed somewhat in the manner of the Three Graces, except fully clad. 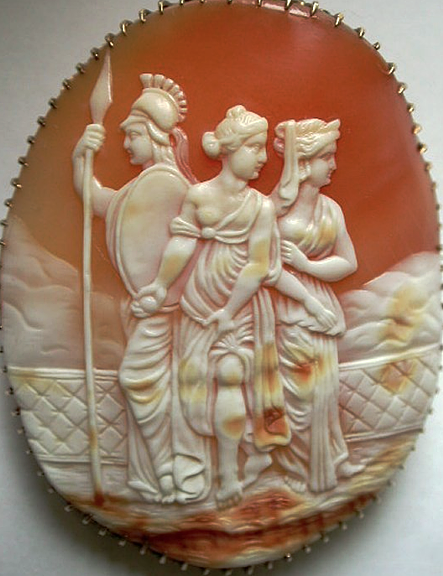 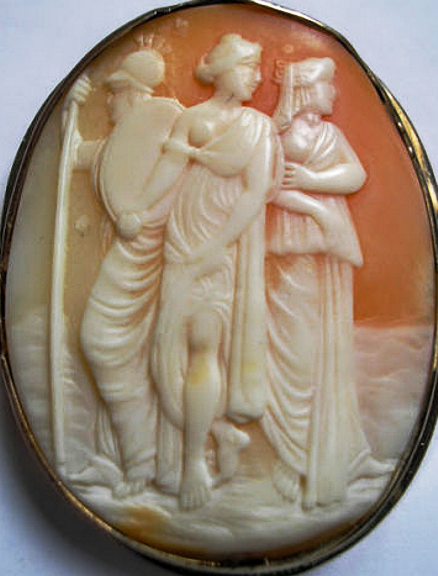 Another common composition shows the two who are not chosen seated off to one side as the winner, last woman standing, collects the pomme d'or.  The carver of the middle cameo included the name of the subject in Italian, Paride. 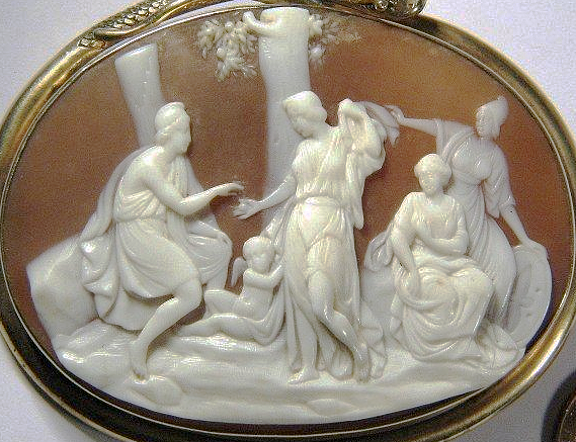 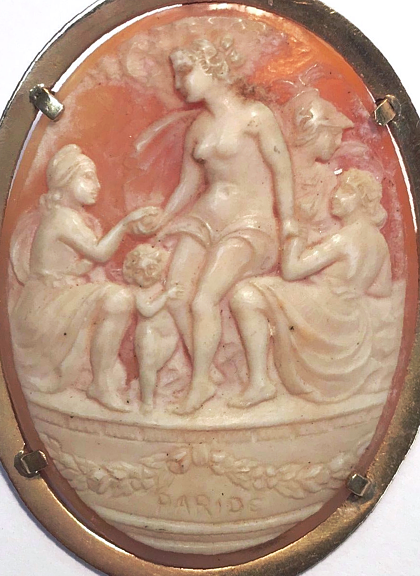 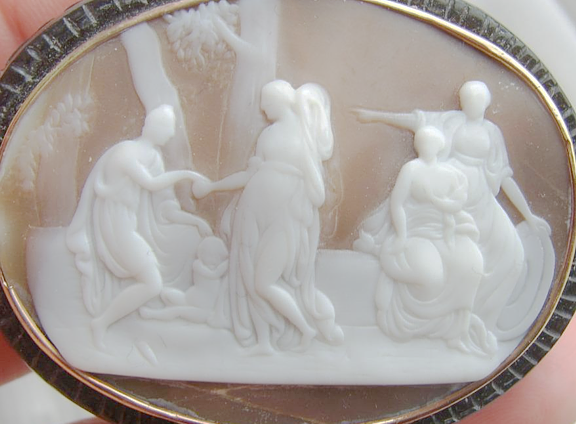