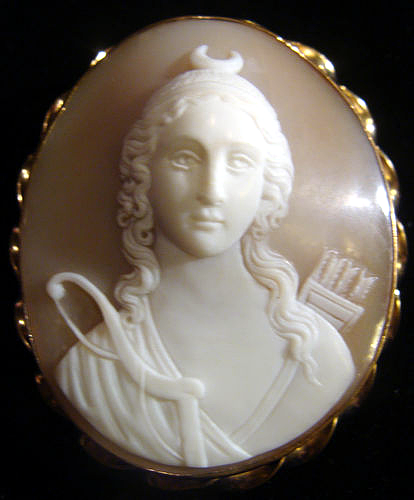 Welcome to Cameo Times, a site specifically for those who love vintage cameos and would like to know more about the multitude of subjects portrayed on them. The focus will be primarily on the mythological. However, research in that rich field often leads to discoveries in others, so the allegorical, religious and historical will also appear.

While there may be occasional articles on topics such as distinguishing conch shell from angel skin coral, the main goal of the Times is to provide, in an easily accessible form, a guide to identifying cameo subjects, accompanied by the lore and art behind them. The Key will allow you to translate what you see into possible identifications. The Cameo Profiles will let you compare your piece to similar ones for confirmation.

At present, Cameo Times is still very much a work in progress, but it will always be so—learning all there is to know is more than a life’s work. Cameo carvers of the 19th and early 20th centuries drew on 2,000 years of imagery, with sources ranging from Roman Imperial coins and engraved gems, through the Renaissance masters, up to the neoclassical artists of the 18th and early 19th centuries. Some images we see frequently and know by name; others we know we have seen before, but they are going along anonymously or under an alias. The familiar will be presented first, as being of interest to the collector just falling in love with cameos as well as to the dealer who has a cameo to sell only occasionally.

Soon articles on more obscure subjects, as well as expanded Cameo Profiles on the common ones, will be added for the experienced collector and for dealers who recognize the increased appeal of a cameo properly identified and linked to its artistic origins. This material will be available through subscription. Cameo Times will be under constant review and revision, with, we expect, regular additions of entirely new material. Subscribing will keep you up to date on our latest discoveries.

We hope you will find as much enjoyment as we do in gaining deeper knowledge of these little treasures and that subscribers will eventually participate in the planned Cameo Forum. One of the discoveries we have made is that many images are more ambiguous than generally thought, with museums, research projects, numismatists and auction house appraisers differing in their identifications. These alone can make for lively discussion; many more are likely to emerge. The Forum will allow the cameo community to connect with one another, to share their knowledge and passion, and to engage in friendly debate.