Joyful and animated, these figures, linked hand in hand, adorn many Wedgwood pieces and are commonly known as The Dancing Hours.  They will probably dance on under that name, but there are reasons to reconsider this identification. 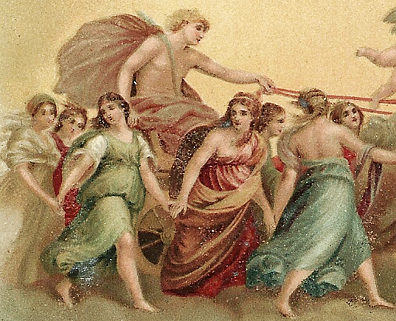 The artist John Flaxman, no longer a household name but quite prominent in his day, began his professional career as a modeler for Wedgwood, and the trains of figures generally called The Dancing Hours are some of his best known work.  Their resemblance to the Hours seen most frequently on cameos, those encircling the Chariot of the Sun in reproductions of Guido Reni's Aurora, is undeniable.  However, is it enough for us to classify them also as Hours?

Flaxman's figures are seen most often in sets of six.  Only very large pieces, such as this basalt ware bowl, can accommodate more.

If they are the Hours, one would expect that they would number 24 or, after Raphael (this topic is available to Premium Subscribers), following the ancient Greeks, 12.  It is possible there is an additional sextet not found during research for this article, but it appears there are a total of 18 dancing women, too few or too many in number for the Hours.

They display none of the attributes of Hours.  Two carry wreaths, suggestive of the Muses, but Flaxman’s relief of some of the Muses is very different.  The Wedgwood Museum describes its examples simply as “white relief figures”.  On the other hand, some of them do bear a strong resemblance to the bas-relief, now in the Louvre, known as the Borghese Dancers, which has also become known as The Hours or The Dancing Hours.  An earlier name was Nuptial Chorus.

Context matters: one would be inclined to read these figures differently if they appeared on a sarcophagus, reminding the viewer of the inevitable outcome of the passage of time,  than if they encircled a wine jug in celebration.  Such a dance is still traditional at Greek weddings.  Perhaps with a triumphant clashing of shields, ancient warriors performed their own version.

The prototype provided by the Borghese Five was widely expanded and adapted by artists working in a neo-classical style.  They may have inspired Reni, who quite likely inspired Flaxman.  This panel, at first glance, would seem to be the six missing figures needed to complete a complement of 24 for Wedgwood's set.  Comparison with the third set of six shown above reveals it as an impostor.

The first figure on the left is a fairly faithful copy of her counterpart in the second panel.  The figure to her right is similar to the next one on the second panel, but has her head turned to the viewer.  The next two figures are uncharacteristically flat footed for Flaxman; the fifth figure differs in posture so much she seems to be doing a different, more vigorous dance than the others.  (The author keeps hearing a square dance caller give the command: right and left grand!)  The right terminal figure has her head twisted around to an extent that may put some readers in mind of the movie The Exorcist; Flaxman's figures are always anatomically correct.  Also, at no other point does Flaxamn leave as large a gap as there is between the fifth and sixth figures of this panel.  The rhythm of his dancers is never broken.

This mass produced planter follows in the lineage, while this small molded glass piece is probably copied from an actual Wedgwood handled vase.