Poseidon is one of the first generation Olympian gods, son of Cronos and Rhea, brother to Zeus and Hera. The fiercely powerful god of the sea, he is able to summon up storms with immense wind and waves, as well as earthquakes. If you were one of the heroes of the Trojan War, sailing to or from Greece (or in the case of Aeneas, to Italy) his favor could speed you on your way; his fury could destroy your fleet and drown your men. Rather incongruously, he is also associated with the horse, either as their creator or their master; the tales and scholarly explanations for this are many and vary widely. In one story he forces himself on Demeter, who has transformed herself into a mare to evade him, with Arion, the first horse, being the resultant offspring. 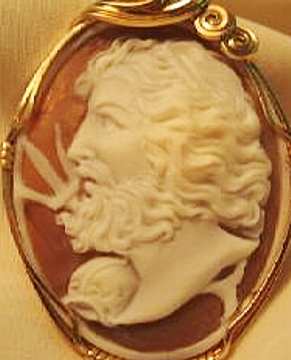 Poseidon/Neptune is recognizable by his primary attribute, the trident, a three-pronged fish spear, as well as by long hair and beard flowing in the wind. The carver of the first cameo also included a dolphin.  Without his trident, he can look very much like his brother Zeus; however, while his hair may be bound with a fillet, he does not wear a wreath of laurel or oak. 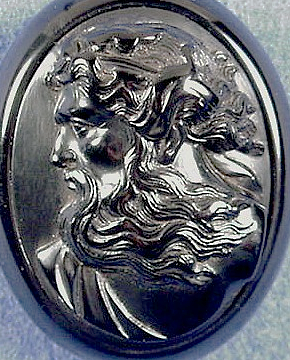 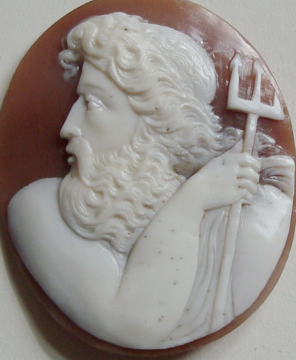 The god sometimes rides the waves in a chariot, which may be well suited to traversing the waters, or seem better suited to land, yet nonetheless carries him across the surface of his vast realm. On the first cameo he is shown being drawn in a scallop shell by a pair of hippocamps, part horse, part fish or sea monster.  (What Cupid is carrying is indistinct but may be a horn—Cupid is perhaps playing at being Poseidon’s herald; it may also be a laurel wreath, suggesting that the maritime god is about to be the victor in some contest.  The fact that Cupid is in the scene at all suggests the contest will be an amorous one.)  In the second depiction, he rolls along in a wheeled chariot with a scallop shape, drawn by a team of horses. Poseidon can not only stir up the seas, he can part the waves and make the water lie flat. 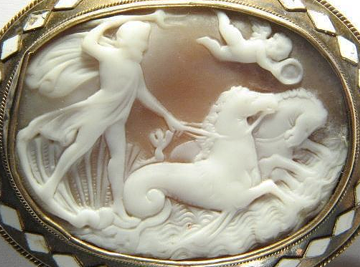 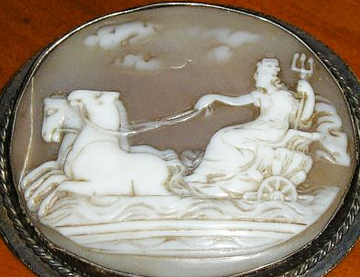